This is an app that track in real time where the starlink satellites are located in Augmented reality. Check when you will see them in your sky.

Even with bad visibility, you will see where the satellites are with a drawing of the satellite in your screen.

Discover the satellites around the planet Earth

SpaceX releases 60 satellites with each rocket launch. Do you imagine more than 2000 satellites around?

Check the period, altitude and speed of satellites.

Discover how much time they spend to turn the whole planet Earth, the speed and altitude.

Know The EMFs You Have Received During the Day.

To improve something, it must be measured. Check the EMF exposure.

The SpaceX System will make use of advanced phased array beam-forming and digital processing technologies onboard each satellite payload in order to make highly efficient use of spectrum resources and share spectrum flexibly with other space-based and terrestrial licensed users. Phased array technologies will be employed on the system’s user terminals to allow for highly directive, steered antenna beams that track the system’s satellites. The same phased array technologies in gateway earth stations will generate high-gain steered beams to communicate with multiple satellites within the constellations from a single gateway site. The system will also employ optical inter-satellite links for seamless network management and continuity of service, while minimizing the spectrum footprint of the system overall and facilitating spectrum sharing with other space-based and terrestrial systems. The broadband services will be available for residential, commercial, institutional, governmental and professional users worldwide.

All satellites in each of the two SpaceX System constellations have been designed with the same V-band transmit and receive antenna beams. The antenna gain contours for the beams of representative space stations in each constellation, which are essentially the same for satellites operating in all planes and altitudes within that constellation, are embedded in the associated Schedule S and in the Technical Database submitted herewith. Below we describe the methodology for their presentation therein.

For both the LEO and VLEO Constellations, all downlink spot beams on each satellite are independently steerable over the full field of view of the Earth. However, user terminals and gateways communicate only with satellites at an elevation angle of at least 35 degrees. Consequently, as shown in Figure A.3.1-1 below, each satellite in the LEO Constellation, operating at an altitude of 1,150 km, will provide service only up to 43.95 degrees away from boresight (nadir), while each satellite in the VLEO Constellation operating at 335.9 km will provide service only up to 51.09 degrees from boresight as shown in Figure. 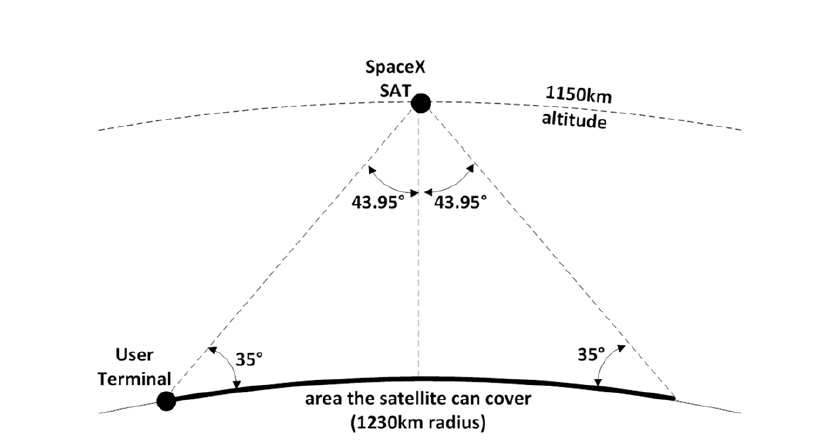 User and gateway beams use narrow beamwidths of 1.5 and 1.0 degrees, respectively. These beams will be divided into channels that are a multiple of 7.8125 MHz which, depending onutilization and other factors, may be bonded into channels as large as 1 GHz. Each satellite can transmit two beams at the same frequency (with right hand and left hand circular polarization (“RHCP and LHCP”)), but may use only one or the other in specific circumstances. Generally, beams from antennas using phased arrays widen incrementally as they are steered away from boresight.7 However, this widening occurs only in the plane formed by boresight and the center of the beam (“elevation”), and not in the plane normal to that plane formed by boresight and the center of the beam (“azimuth”). As a result, the shape of a phased array beam at boresight is circular but becomes increasingly elliptical when steered away from boresight. Figures A.3.1-3 through A.3.1-5 provide beam contours that illustrate beamwidth changes when user and gateway beams are steered to 0, 20, and 40 degrees away from nadir, in each case at a roll off of -2 dB, -4 dB, -6 dB, -8 dB, -10 dB, -15 dB, and -20 dB. These contours apply to both uplink and downlink beams for both constellations, though the actual size of the beam on the Earth.

Discover when the Starlink Satellite appears in your zone.

Hi! I am Jordi Martín, founder of App Look Studio.

I have a career degree in electronic engineering and a master degree in managing industrial factories.

I am an entrepreneur of mobile apps since 2012. I love to work in useful projects that help people.

This website will help you to understand some interesting things about 5G Satellites. 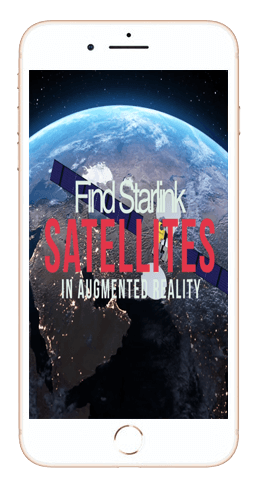 Visualize where the Starlink Satellites are located.